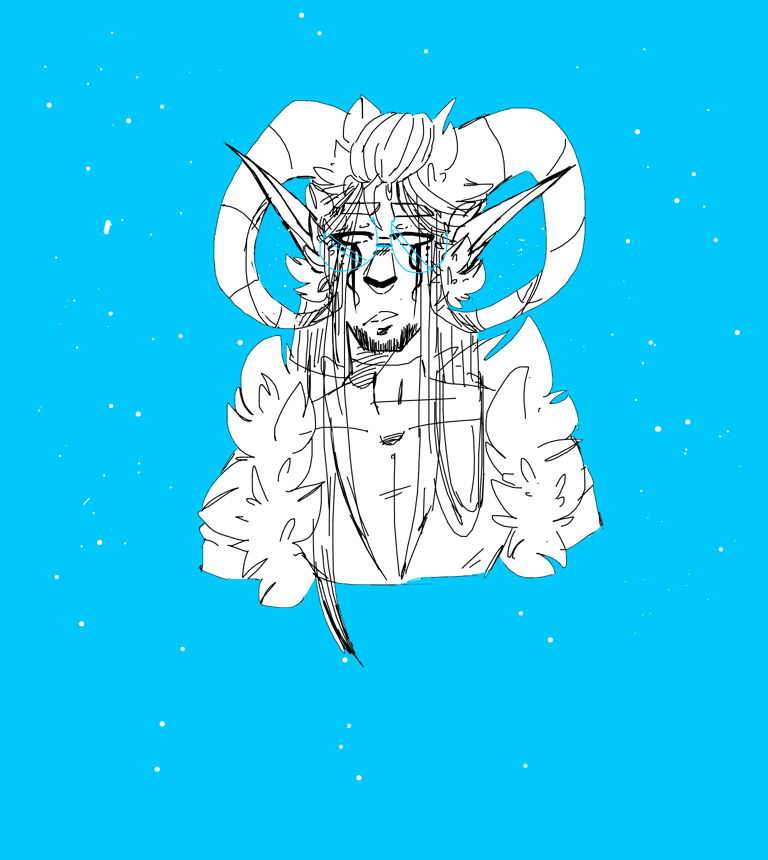 This is my new DND oc, he doesn’t have a name- but hers some background info!

His mother, a wondering elf, found his father, a beast of the mountains.

His father, a Ram like beast with white fur and horns soon fell for his tan skinned, elf, mother.
They soon had (he doesn’t have a name yet-) a Elf-Ram halfling, called NeverBeasts.
His mother, who was raised in the warm, autum forests soon died after his birth,the snowy conditions of the mountains too much for her. His father, a paladin, raised him up, teaching him the ways of a paladin. But (my oc) had a very bad habit. He preferred to fight and race (race, like we have street racing and drag races (cars) they had races like that, but with wha5 they called Helluva’s (Basically sleds). Everything was peaceful until their small, peaceful mountain village was raided, and burned. The colony of the “beasts”, as humans called them, were hunted, killed and skinned for their fur. (My oc)’s father was caught and killed by these humans, and (my oc) in a fit of rage stalked. Them, and waited till they had left to steal his fathers once beautiful fur, using it as a reminder of what humans did to his people.

And that’s the start of the campaign!

A bit about him though, then we’re done, I promise!

He is 10ft tall, and weighs about .. 325 pounds of pure muscle.
He, despite his beastly appearance, has a quiet, gentle voice.
He is also around 30000 years old human time (he’s about 19 in Neverbeast years)
All the fur on his cloths is his fathers, and he wears his mother’s bracelets as horn raps.
He has a strong distaste for humans, but gives most the benefit of the doubt but is still very wary, and has the tendency to be aggressive when provoked, or frightened!

Thank you for reading all this😅😅😅

And I suck at naming aswell😢😢

And, when naming him try to think like...mystical!